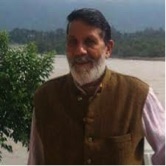 [Sri Chandi Prasad Bhatt Chipko Movement to save the forests] Chandi Prasad Bhatt, a 1992 winner of the Ramon Magsaysay Award for Community Leadership, is from a small village in Chamoli District, Uttarkhand. Chandi Prasad Bhatt became one of the few villagers to complete the high school diploma. He became interested in the non-violence movement of Gandhi and joined Vinoba Bhave’s Bhoodan (Gift of Land) movement.

Bhatt-ji is best known as the father of Chipko Andolan known as “Hug the Trees Movement” in the west. Chipko is one of the few environmental struggles that has a large number of village women participating in, and indeed leading, the movement. His concern for the environment was initiated when he participated in rescue operations after landslides and flooding on the Alaknanda river. He analyzed the mishaps and concluded, with his colleagues of Dasholi Society for Village Self Rule (DGSM), that these damages were linked to previous deforestation in Uttarkhand.

His struggle to save the environment and access to forest produce by the tribal people included reforms of the existing forest policy; planting appropriate trees by villagers, often with the participation of the forestry department; seedling nurseries managed by villagers; and environment conservation camps in most of the villages Uttarkhand. He also works on the issues concerning big irrigation and hydroelectric projects in the sensitive of the Himalayas.

“Forest dwellers cannot be prohibited by law from satisfying their basic needs from the forests … unless we framework in which forests and people can live together, one or the other will be destroyed”, he said at an conference in Kenya.