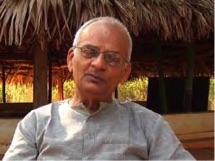 Dr. Bhagavatula Venkata Parameswara Rao, the moving spirit behind the trust, had been involved in rural development well before that since 1967.

After getting a Ph.D. in nuclear sciences from the USA in 1967, Dr. B.V.Parameswara Rao returned to his native village Dimili, with the sole objective of doing something for the people of his village. Armed with enthusiasm and energy as his only strengths and undaunted by the obstacles ahead, Dr. Parameswara Rao started his missionary work by first motivating the villagers in and around Dimili to build a high school for children. After getting well designed spacious building built for the school, formally on people’s contribution and making it the state’s best run school for a decade, he applied himself with missionary zeal towards the vision of a prosperous and all round flourishing rural India.

Since then his pioneering and trend-setting experiments have won him and his colleagues world wide recognition. His services were sought as Consultant by the World Bank and as a member of various missions of Government of India including National Literacy Mission, National Waste Land Development Board, All India Khadi and Village Industries Board and National Institute of Rural Development. Since its inception, BCT has come a long way in its experiments in different aspects of development work and has been recognized as one of those few organizations that are effective at the grass root level in villages covered by them. The many important visitors to BCT include the governors of the state, ministers, world bank teams, heads of public undertaking and other distinguished professionals and intellectuals.