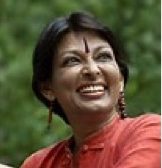 Dr. Mallika Sarabhai is one of India’s leading choreographers and dancers, a PhD in organisational behavior, has been the co-director of the prestigious arts institution, Darpana Academy of Performing Arts, for several decades.

She is a social activist and champion for humanrights and the economically and socially disadvataged people. As an activist for societal education and women’s empowerment, Mallika has been using her work for social change. In 1989 she created the first of her hard-hitting solo theatrical works, Shakti: The Power of Women. Since then Mallika has created numerous stage productions which have raised awareness, highlighted crucial issues and advocated change, several of which productions have toured internationally as well as throughout India.