Mission: To engage the ICA Community through continuous shared learning

The ICA Forum engages the ICA Community of Indian and US ICA-supported NGOs, as well as its partners and members, in the exchange of ideas and best practices. It was initiated in March 2020 to empower and connect the ICA Community.

Our goal is to Connect the ICA Community to inspire, learn and motivate. Learn from subject matter experts, NGO Leaders, and partners about their NGOs and projects. Share best practices to overcome barriers, manage significant issues, and discuss lessons learned.

Below you can peruse our catalog of bi-monthly webinars:

Our first FORUM event for 2021

Please save the date and join us to hear two amazing individuals, Dr. Ravi Chopra and Mr. Zubin Sharma.

Two social entrepreneurs, Dr. Ravi Chopra and Zubin Mehta relocated from the US to India to initiate social change at the grass-roots level. These two individuals from different generations and different decades shared a vision: to live and work with the vulnerable segments of India’s population to bring relief to them. Hear their stories, motivations, and unique experiences to learn how they transformed challenges into opportunities and inspired others to do more.

Dr. Ravi Chopra currently chairs a Supreme Court directed committee to study the impact of the Char Dham Pariyojana on the Uttarakhand Himalayas. He is a permanent trustee of the Himalaya Foundation, established by Dr. P. K. Mehta.

Dr. Chopra was the Director of People's Science Institute (PSI), Dehradun until Dec 2014. PSI is a non-profit public interest research and development organization known for its innovative work in the areas of water resources management, environmental quality monitoring, and disaster mitigation and response.

Dr. Chopra formally retired as a PSI employee in April 2017, but he continues to stay in touch with PSI as a consultant.

Zubin Sharma grew up in New York but has lived in Bihar for the past 8 years, where he founded Project Potential. Project Potential catalyzes rural communities to solve their own problems inclusively and sustainably. They unlock community capacity to work on initiatives in education, youth development, entrepreneurship, governance, and arts. Project Potential has been funded by Mr. Narayana Murthy, Mr. SD Shibulal, Mr. Vikram Lal, Infosys Foundation, Ashraya Hastha Trust, Book a Smile, and others.

Zubin has done his BA and MS from the University of Pennsylvania, where he was awarded the prestigious Non-profit Leadership Award, a full-tuition sponsorship which is only awarded to one incoming student based on merit. He has also been an Acumen Fellow, UPenn Center for Social Impact Strategy Fellow, N/Core Incubatee, a Dasra Social Impact Leadership Program Fellow, and a TEDx speaker in the past.

Ritu Marwah, formerly an executive in Silicon Valley, is an award-winning writer She is a fellow of the Annenberg School of the Journalism University of Southern California and UCLA's Laboratory for Environmental Narrative Strategies (LENS). Her story Jinnah’s Daughter was featured in The New York Times’s Express Tribune blog. Ritu Marwah did her Bachelors from St. Stephens College and MBA from IIFT. 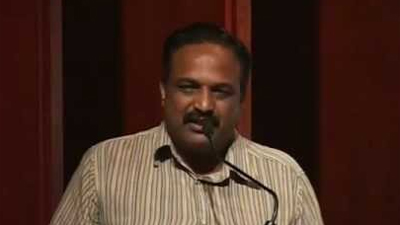 Saturday, March 28, 2020: Initial webinar conducted as ICA’s response to the COVID-19 pandemic. Dr. Girish Kulkarni of Snehalaya shared how his team quickly mobilized to distribute food and supplies to the needy slum dwellers, and then immediately expanded their efforts to provide food, shelter, and COVID-19 education to the migrants. 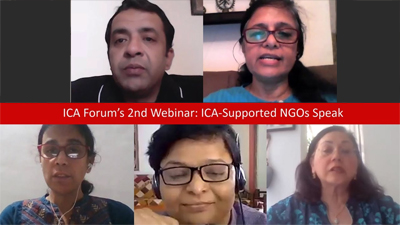 Friday, April 17, 2020: Subsequent webinar conducted as ICA’s response to the COVID-19 pandemic. Nine leaders from ICA-supported Indian NGOs described, on behalf of their organizations, how each used unique strategies to pivot from their own routine work to also prioritize managing the fast-moving COVID-19 pandemic.